We are the recipients of …

In November 2015, Learning Lab Apps was awarded the prestigious Best Emerging Business title in the Western Cape Premier’s Entrepreneurship Recognition Awards. This event, organised by the Western Cape Government of South Africa to promote entrepreneurship, saw over three hundred entries from businesses across the province.

The Awards programme recognizes the achievements and potential of some of the Province’s most exciting entrepreneurs. By acknowledging and showcasing successful entrepreneurs, it is helping to build a culture of entrepreneurship in the Western Cape – and in turn, support the creation of jobs and opportunities by small and medium business.

Our company was up against some seriously tough competition and other brilliant ideas. In the end, the simplicity of WorksheetCloud and the business model of Learning Lab Apps impressed the judges enough to choose us as the ultimate winner. 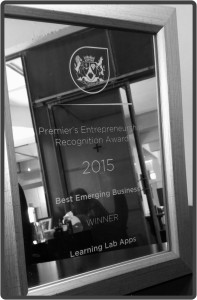 In December 2014 our first app, WorksheetCloud, was announced as the winner of the Cap40 Methys Business Innovation Award for 2014. This award supports the seeding of innovating startups in the Western Cape province of South Africa by awarding a development grant to entrepreneurs coming out with the most innovative, disruptive and promising concepts.

CAP40 is a dynamic community network encouraging the development of business relationships and investment between businesses operating in the Western Cape province of South Africa and France. The network focus is primarily the technology, tourism, wine, energy and retail sectors. 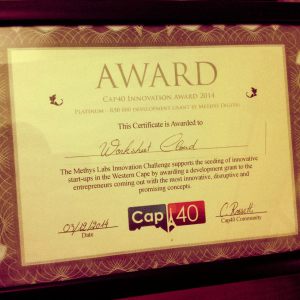